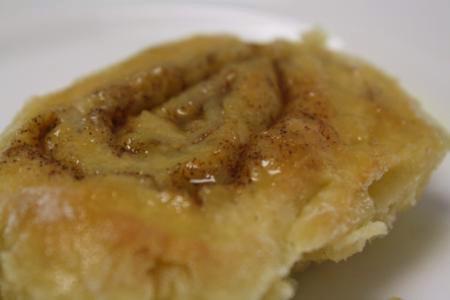 When I was growing up we used to have orange cinnamon rolls every Sunday morning before church.  You know, those ones that you pop out of the cylinder with the little container of icing down at the bottom.  We called them orange danishes, although I am not entirely sure why because that title does not exist on the package, nor are they remotely danish shaped.  But that’s what they are to us.  There were 4 people in our family, and exactly 8 rolls in each container.  So each person got 2 rolls paired with a bowl of cereal, because according to my mom sweet rolls could not make up our entire breakfast.  I think she stopped fighting that battle eventually though. 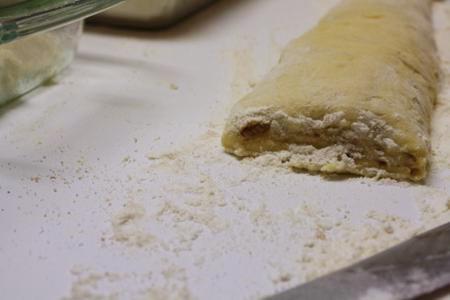 I’ve been craving the idea of making some homemade ones for quite awhile now, and while these did not contain that saccharine sweetness of those over-processed ones that I happen to love, I decided these might be even better.  The dough is that delicious stuff that makes up probably the best yeast rolls I’ve had to date.  The icing, made with orange juice and a hint of orange extract, tastes like pure sweet orange (which I guess is basically what it is), and adds such juiciness to the rolls as it sinks down into the cracks and mixes with the cinnamon and moistens up the whole roll with sweet nectar.  And if you would like to kick up the orange flavor even more, I’d imagine some orange zest in the filling would be nice.

And if this all seems like a lot of work to do in the morning (as it does to me), you can do what I did, which is make them the night before, stick them in the fridge, and pull them out to finish rising in the morning a bit before you’re ready to bake them.  There’s no need not to have a nice homemade breakfast for say, a weekend morning, just because we would rather stay in bed than roll out cinnamon rolls. 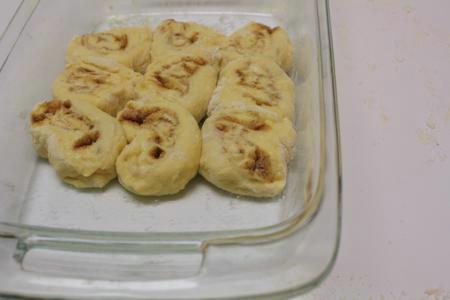 1. In a 1-cup liquid measuring cup, dissolve yeast in warm water.  Stir and then let stand for about 5 minutes, until yeast is completely dissolved.
2. Meanwhile, warm milk in a small saucepan.  Heat until bubbles begin to form around the sides of the pan, stirring often.  Add butter and allow butter to melt in the milk, stirring often.  Once butter is melted, pour the mixture into a large bowl.
3. In a small bowl, beat eggs slightly.  Temper eggs in to the butter/milk mixture (add a spoonful or two of the butter/milk mixture to the eggs, stir, and then add the egg mixture back into the butter and milk).
4. Stir in yeast mixture.
5. Add flour, sugar, and salt, stirring it in with a wooden spoon until mixture is uniform and sticky.
6. Cover bowl with a towel and allow to rise until doubled in bulk, 2-3 hours.
7. Punch down dough (use your wooden spoon because the dough is very sticky) and dump dough out onto a liberally floured board.  Flour the top of the dough and roll out in a rectangle, with the dough about 1/4 inch thick.
8. Spread softened butter over the dough.  Then combine sugar and cinnamon in a bowl, and evenly sprinkle the mixture over the butter.  Roll the dough up into a log (roll from the long end so that your log is longer rather than shorter).  Cut the log into slices about 1/2 inch thick, placing each slice in a pan slightly apart from one another.
9. Cover rolls and allow to rise until doubled in bulk, about 2 hours.
10. Preheat oven to 350 degrees Fahrenheit.
11. Bake rolls for about 15-20 minutes.
12. While rolls are baking, make the icing.  Combine orange juice, powdered sugar, and orange extract in a small bowl, adding more or less powdered sugar until it is your preferred thickness.
13. Remove rolls from oven and serve hot with icing drizzled on top.