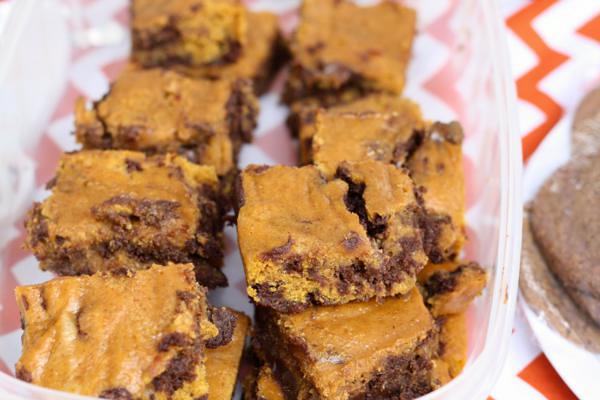 So, much to my dismay, I realize that it has been over two months since I have had a dessert recipe on here.  That is ridiculous and a problem we need to solve today.  Mostly it’s been caused by my recent focus on making our dinners easier and trying to find new favorite go-to easy meals.  There was also the beginning of fall braising obsession that lasted for a couple of weeks.  Plus some travel, some vegetables, and the launching of my meals plans (which I will hopefully have another edition of for you in a couple of weeks).  But all of this should be no excuse for the lack of chocolate to be found here lately. 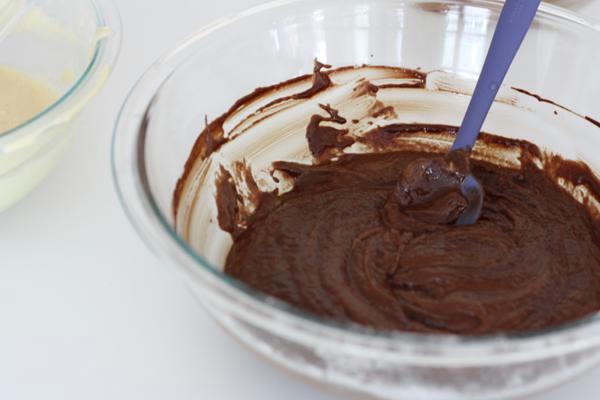 To be fair, I did try these brownies about a month ago, with the hopes of sharing them with you.  But I wasn’t the biggest fan of the original recipe, mostly because the square nine-inch pan caused the brownies to be entirely too tall (and also take forever to bake).  I wanted to try them again with a 9 x 13 inch pan, and with more of a “layer” concept than a “swirl” concept, because to be honest the swirling never really worked for me here and resulted in ugly orange-ish brown-ish brownies instead of the beautiful pumpkin and chocolate ribboned ones I was supposed to get.

But I figured it out, and now we can end this very long unintentional dessert hiatus.  I’m sorry.  I’ll try not to let it happen again.

Have a wonderful Thanksgiving. 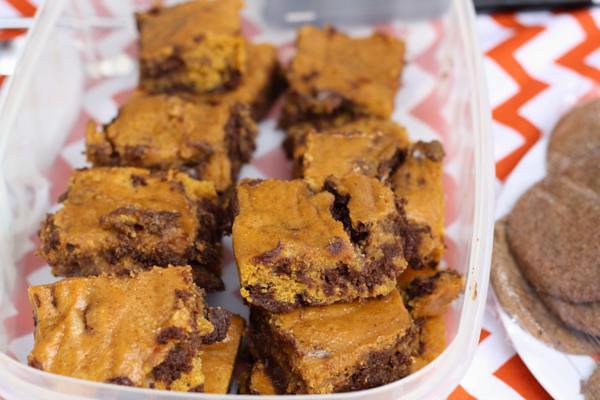 The original recipe calls for baking the brownies in a 9 x 9 square pan, which I thought made the brownies too tall, and they seemed to take an extremely long time to bake until set.  I think they work better in a 9 x 13 pan.  I also found it somewhat pointless to “swirl” the brownies, and thought simply layering the flavors was sufficient.  Be patient with your chocolate layer; it’s much stiffer than the pumpkin layer–just do your best to spread it a bit.

1. Preheat oven to 350 degrees Fahrenheit.  Butter a 9 x 13 inch baking pan, line with parchment paper, and then butter the parchment paper.
2. In a medium sized heat proof bowl, combine the butter and chocolate.  Set bowl over a pot of simmering water and heat until the chocolate is melted and smooth, stirring often (or melt the butter and chocolate together in the microwave, heating in 30 second intervals and stirring between each interval, until the chocolate is melted).
3. In another medium sized bowl, combine the flour, baking powder, cayenne, and salt.  Stir to combine.
4. In a large bowl (to be used with an electric mixer), combine the sugar, eggs, and vanilla.  Beat with an electric mixer on medium speed for about 3 minutes, until fluffy and well combined.  Slowly add the flour and beat on low speed until combined.
5. Pour half of the batter into a separate bowl, so that you have two bowls of the batter.  Stir the melted chocolate into one of the bowls.  In the other bowl, add the pumpkin, vegetable oil, cinnamon, and nutmeg.  Stir until combined.
6. Pour half of the chocolate batter into the prepared pan and spread out evenly.  Then pour half of the pumpkin batter on top of the chocolate batter, spreading it out evenly.  In small spoonfuls, scoop the remaining chocolate batter onto the pumpkin batter, then gently spread it out (your chocolate mixture and pumpkin mixture will combine somewhat–this is fine).  Top evenly with the rest of the pumpkin batter.
7. Bake for 30-40 minutes, until the batter is set.  Let cool and cut into squares to serve.