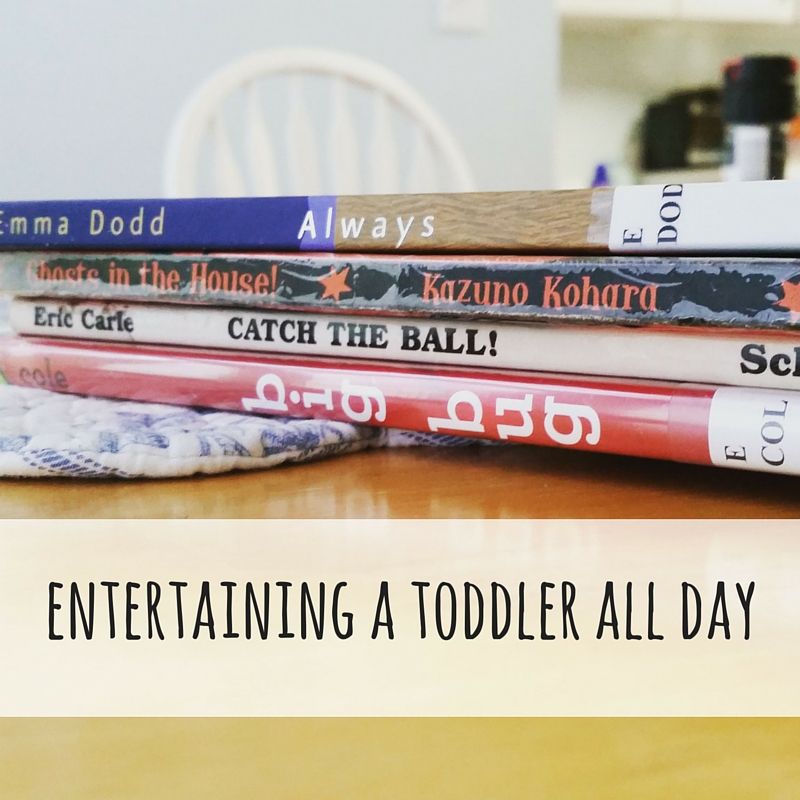 When I first made the decision to step back from working as much as I was and spend most of my time home with Evelyn, my biggest fear was figuring out what we were going to do all day.  We had spent her infant months together at my office for the most part, which was hard in its own way, but was also a familiar.  I had no idea how I was going to entertain Evelyn all day all week at home.  What were we going to do?  Where were we going to go?

Well, it’s turns out, there’s a lot to do.  A couple of weeks ago I had plans for us to run to Target on Monday for a few things.  Our week ended up so busy though, I don’t think we made it to Target until Friday.

Getting Out of the House

I used to shy away from errands during the week, always asking Gerrit if he could run by the store on his way home from work, but with Evelyn running errands gives us something to do.  And she LOVES seeing people at the store.

We also have play dates from time to time and go to the library a lot; and I’m on the hunt for a couple more things to add to our rotation of activities, especially because I have a suspicion she’ll be dropping her morning nap sometime soon.

With the weather turning nice this fall, we’ve been going on walks a lot more than we did during the summer.  I’m not sure how this will change once winter hits, but I plan to keep it up as much as we can.

We also have a swing for her in the backyard which is always a big hit when we’ve been inside just a bit too much.  (She is always, night and day and rain and shine, pointing to the door trying to get us to take her outside to her swing.)

This seems obvious, but there are SO MANY great toddler activities on pinterest.  I’ve made a list of some to try, and on days when we don’t have a lot of other things going on we’ll work our way through them.  Some of them have been a hit (plastic bags of paint in the window!), some have been a flop (cloud dough…which I think she’ll like when she’s a bit older), but they all give us something new to try.  And I’m excited for her to get older and our potential activities to expand as she learns and understands more.

Again, obvious, but we love books.  When I read them Evelyn only half listens as she plays, but I’ll sit on the couch and we’ll have story time at least once a day.  And usually she brings books to me at other random times during the day to read as well (although at this point in her life she often walks away after the first page or two).

So much of our day is just taken up by Evelyn playing with her toys, either with me or by herself while I do things like load the dishwasher for the thousandth time (In the book I’m reading, Sabbath in the Suburbs, I think my favorite line has been “Parenthood is not repetitive. It’s liturgical.”)  The trick I’ve found to play time is to rotate rooms.  We have toys for her in the family room, her room, and in the playroom.  On days when we are home a lot, a change of scenery is a must.

Gerrit and I have had a lot of conversations about limiting the technology Evelyn uses, but that doesn’t mean we don’t also use it to our advantage.  We have Pandora on (lots of Toddler and Raffi radio) almost constantly.  And on days when we’re really dragging, we’ll break out an episode of Sesame Street or Daniel Tiger.

A Few Things in My Back Pocket

There are few small things I always try to keep in reserve for when we really need them, like bubbles and coloring.  Evelyn’s not quite at an age where she can color on her own (in fact, she’s just starting to understand how coloring works), so when we break out the crayons it is a special and supervised activity. I also keep a few toys in a closet and only pull them out once a week or so, like her Megablocks.

Anyone else have any wisdom to share on entertaining toddlers?