I have some pretty strong feelings about condiments.  As in, I generally do not accept them in my life.  My one exception is that I like to put mayonnaise on my grilled cheese sandwich.  But aside from that, I would prefer everything dry and plain and without any kind of colored goop.

So I’m not really sure where the idea to make some aioli came from.  Surely not from my ketchup and mustard and mayonnaise hating self.  But for some reason I had a hankering to make something to go on our panini, and something like this was the first thing that came to mind.

It took a couple of tries to get it right, the main reason being that I tried to make an extremely small batch the first time, because really, what would Gerrit and I do with a whole cup of aioli?  But halving a batch of aioli was not the smartest idea because there wasn’t enough substance for the food processor to actually process, as in the blade just whirred above the garlic and egg, passing it all over.  Moving it to the blender helped a bit, but my proportions weren’t quite right, so as delicious as it was, the substance of it was off.

I tried it again this past weekend when we had Gerrit’s brother and his fiancee over for dinner.  They wanted some advice as they are starting to plan their wedding, which is really sweet.  And honestly I put a lot of work into keeping my wedding planning organized, so I’m glad that someone else is going to benefit from those checklists and schedules that I spent hours on.

We made sandwiches on the panini press with chicken and cheese and some of this aioli.  I’m the type of person who would just be fine eating plain chicken and cheese sandwiches for the entirety of my life.  Really it’s how I always order my sandwiches in restaurants.  But this aioli, spread lightly on the inside of the bread, added a nice buttery tang to each bite.  I roasted the garlic before using it, because I love the sweetness the process gives the garlic.  And blended together with the egg yolks and olive oil to create a creamy emulsified spread, it became something I’m sure you’ll love to spread on all kinds of sandwiches. 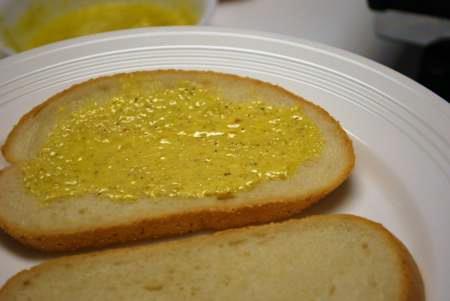 *Do be aware that the eggs aren’t cooked in this.  If this makes you uncomfortable, use it on toasted sandwiches, or, like we did, on panini.

Leave a Reply to thelittleloaf Click here to cancel reply.